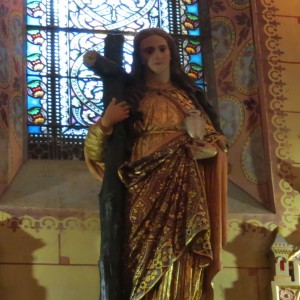 Experience a tour designed to open your extra-sensory abilities by communing with a magical land that some say is the most energetically powerful place in the world. Created for those who wish a deeper communion with Mary Magdalene and the empowering, mystical country-side of Southern France.

The land of the Cathars has many sacred sites with lay lines (fissures of earth based energy in a underground path) creating much of the powerful resonances at the structures all coming from one source, the sacred mountain. Where legend says Mary Magdalene did rituals on top of the mountain close to a source of an inner-dimensional consciousness, Pic De Bugarach. Some locals and new age community members claim The Pic is a Stargate. A conduit for energies from other realities to transfer into the earth while simultaneously flowing from an inter-dimensional reality deep within the earth out into the cosmos above the mountain top.

The vibration of a Stargate is of a higher frequency than energies of the earth, making it hard to describe. It simply feels lighter and brighter than anything generated on the planet. Exposure to the Pic opens the heart to a greater place of joy and the soul’s development grows the more our intention is focused on receiving its constant transmissions.

The consciousness of other worlds is what the inner dimensional gate possesses and resonates from inner sources throughout the mountain, energizing the land with its power sent out through the lay lines extending out in multiple directions. The ancient cultures knew this and designed their holy places in alignment to the mountain and lay lines.

The Cathars, (a group practicing the teachings of Mary Magdalene until the 1300’s), Knights Templar and Celts knew of the power of the energetic lines in building their chapels, Château’s and other structures to commune with the powers of the sacred mountain. Many of the structures are active transmitters and receivers with the Pic De Bugarach accentuating visitors spiritual experience with these divine multidimensional energies.

The churches constructed by the Cathars embody not only a sacred connection to Bugarach but also an energetic resonance with Mary Magdalene. The Cathars (Celtic and Visigoth tribes) worshiped the Divine feminine through Mary and the churches they built still carry the consort of, (some say wife of) Jesus’ presence. When inside one of these churches people experience a sweet, gentle feminine presence very different than a typical Catholic church whose spiritual foundations are built in the masculine. Included in these churches is the world famous, Rennes Le Chateau with it ornate, beautiful designs, yet still vibrating in the presence of the divine feminine. Other active churches in Bugarach, Alet Le Bain, and Polycarpe resonate with The Mary Consciousness as well.

One of the most profound churches of the region, constructed in a cave is De Hermitage De Galamus at De Gorge De La Galamus. It is believed to be where Mary led rituals. For those who are extra sensitive sense her presence there. At night the surveillance cameras record the transformation of Jesus on the cross, behind the alter, changing into Mary nightly. The managers of the chapel do not publicize this, but is rumored amongst the locals.

See these amazing places and have the profound experiences of a lifetime.

For many, the Bugarach experience resonates most strongly in the heart chakra. It is a feeling of extreme unconditional love and fulfillment. Many feel they have come home and most likely are reuniting a past life when they were in the presence of Jesus, Mary Magdalene or the Virgin Mary. There are many French that believe Jesus came to France and lived a quiet life raising their daughter. Those who were part of the Jesus and Mary community to some degree are called, Merovingians. In the presence of this land something activates within them, the joy of coming home, a most powerful reincarnation.

I confirmed my Merovingian connection when I first saw Pic De Bugarach from a distance of eight kilometers. As I viewed the mountain for the first time my heart simultaneously opened as if I saw the love of my life. I quickly pulled over to the side of the winding, French country road to fully soak in the moment. As I stood and saw the peak, covered in clouds as it often is, on this warm sunny, summer day a feeling of joy spread from my heart throughout my body. My soul was being awakened to a new level as it had in another lifetime.

I was driving for my first stay at Corines. She too is a part of the history and knew she had to live by the mountain. Living at Corine’s for the summer changed me in the most profound ways as I was able to commune daily with the mountain. Lay lines run through her home so it is easy to tap into De Pic De Bugarach while sitting comfortably on a couch. It was the best of both worlds, being close to the most expanded energy while living in the pleasure of a simple yet beautiful French home.

When meeting several of these Merovingians there was always a heart opening between us. As if I was seeing a long-lost friend. It did not matter if we spoke different languages, we were cherishing the sisterhood or brotherhood of this higher power.

See how something becomes activated within when you are in the presence of De Pic.

The Pic De Bugarach has a series of energetic centers within and outside its form. The centers emanate powerful energies stimulating those walking up it and by being in the general area. At the base of the mountain the heart chakra is stimulated and as one ascends the focus changes to the solar plexus chakra. Once at the peak the thymus is stimulated. The thymus is a special gland as it interprets information the heart is receiving therefore it is a key in developing psychic abilities. On the top of the mountain area we can expand our extra sensory abilities by activating the thymus gland. Doing a walking meditation up and down the mountain is a profound experience. I will be sharing and activating energies to facilitate a most heart-felt and body expansive experience.

Looking into the inner dimensional reality above Pic De Bugarach is perceiving the lightest reality as if it is a perception of heaven or the world of the Arch Angels. The human perception could not see it completely as we do not have a reference for it. However, when we commune with its power it can change us in big ways.

The Languedoc Region of Southern France has a variety of Cathar Château’s (fortresses), Mary based churches, Roman sites, Templar fortresses, Celtic stone circles, high vibrational healing waters, and other unique places. Beyond the history they all have their own energetic resonance with the divine while connected via lay lines to De Pic De Bugarach.

The Languedoc Region of Southern France is located in the foothills of the Pyrenees Mountains, a most beautiful region, similar to the conditions of the Cascade Mountains of Oregon. Most of the land is a densely high growth forest with pastures for grazing and farming. Community Forests make up the majority of the land as well as located immediately in back and front of Corine’s place. At certain times of the year the mushroom hunting is fantastic with fresh, chanterelle mushroom dinners a common delicacy. The weather is a mixture of sunny days with the upward, warm winds of the Mediterranean Sea and colder, cloudy days coming down from the Northern Atlantic Ocean.

Come join us in a land that has been long recognized as magical. Meditate and experience energetic activations to assist in actualizing these energies. Give yourself a phenomenal transformation.