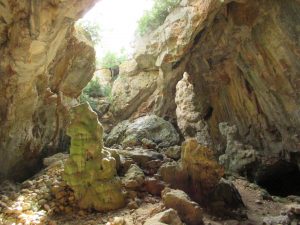 Grotte De Perillos is located in the desert area north of Perpignon, France where few people live in this 10 square-mile area. Most people have vineyards in nearby areas where the grapes enjoy this sunnier, warmer region of France. In the middle of this desert is an area where only a dozen or so people in the village of Perillos. Nearby the small hamlet is the Château De Perillos and down the road the Grotte De Perillos. Author Lars Muhl claims that you can only find the cave if you’re guided by God meaning it is not the easiest place to locate.

Upon my first visit to this cave I had an immediate impression there was something very old created here by Cathar society. It is a place where prayers and rituals were done in a sacred way. It is as if you can still feel the presence of Cathar initiates standing in a circle to commune with the deeper source while in this large dwelling. Grotte De Perillos is a large cave where the middle part of the underground ceiling has collapsed therefore it is the space where the sun and stars shine into the underground area that leads us to a deeper entry point into the earth.

In my latest latest channeled meditation I experienced at Grotte De Perillos it opened my awareness to a deeper path within the earth. The presence of the inner sun opened while meditating in the central area of the cave. This was no surprise as I have opened to this power many times in other locations. However, the history of this magnificent cave allowed me to see the central sun as a source of not only Isis as she carried its power in Egyptian culture but the inner sun as a form of a gateway to contact more other worldly or extraterrestrial realities.

The ancient Egyptians stepped into communion with extraterrestrials races such as The Hathors, Pliedians and Acturians using these meditation pathways of the inner sun. The Cathor people may have learned this as well through the teachings of Mary Magdalene and the Essines (who likely came here with Mary). The Cathors may have practiced such techniques and rituals for hundreds of years here in France and Perillos.

In many ancient depictions of Isis there is a sun held by a crown on top of her head. It would be easy to assume that she is holding the sun that shines upon the earth. However, Isis is a goddess of mother earth and everything about her is of the earth therefore it is possible the sun above her head represents the inner sun that is inside the earth itself. Many have described such a power for centuries but there is little  describing its purpose. I always thought it might be a fertility or generative power for the land and families. Now I am beginning to wonder if there is more purposes.

According to author Lars Muhl in his book “The O Manuscript” this was Mary’s place to do a retreat or spiritual sabbatical. It feels true to me that Mary opened a portal in the Grotte De Perillos. She may have traveled to other worlds in this cave. Due to her extraordinary talents she created a pathway into other worlds here therefore the inner earth realities are easy to travel through. Others had followed her example through the centuries and a secure pathway was created as the practice of meditations to journey into the earth or use of a lay line makes it easier for others to do so in future years. Psychic or intuitive practice does leave a residue and assists others to do the same in future years especially if the people are skilled at astral travel.

In addition, in the eighth century a black Madonna was found in this cave along with a few other ancient artifacts and are held in the local church at Opoul De Perillos. They are not for public viewing but are taken out on special occasions by the local caretakers. I have never seen them but I have been told by friends that they exist. This is more information that validates Mary Magdalene and the Cathars worshipped at the Grotte De Perillios.

I love to go to this special cave, Grotte De Perillos, to meditate and the temperature is always ‘cave cool’ and yet there is plenty of light inside the cave. It is comfortable to spend a few hours in silence comfortably. It always feels like there is a potential connection between cosmos and the earth due to the dynamics of no ceiling in the middle of cave yet it is a large cave with plenty of darken areas. There are still old stalactites in the deeper recesses of the cave giving it a grotto feeling while having the safety of being well lit.

Tours
Grotte De Perillos
The Sacred Light Within The Earth and slideshow
Why Is Mary Magdalene Important In This Day And Age?