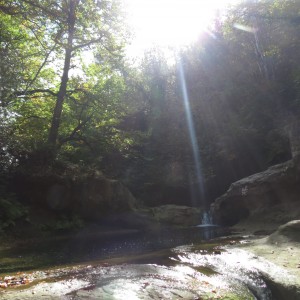 The magical journey began for me and May of 2015, I boarded a airplane to begin a three-month journey through the land of my dreams, France. I was not too sure what I was looking for on this sojourn, but I knew I wanted to go to Rennes Les Chateau in southern France. Little did I know I would meet real-to life French people and create long-lasting friendships. Somehow by the fate of spirits higher than me as my guide I met Corine, who lived across the street from the world famous, Stargate, Pic De Bugarach.

When I first discovered I would be living in this special place I asked my one, metaphysically inclined French friend said about the Pic. She responded by saying the energy was so powerful airplanes cannot fly directly over it because the energies flowing out of the peak misaligned their guidance systems. I knew then I was ready for a treat.

Now that I have spent over 5 months in this area, three tours, I have uncovered a wealth of places holding historical significance, natural energetic phenomenon, and/or are sacred sites known only by the locals. It is just like the French, to not publicize their treasures. They are a modest people and throughout history it was the wiser course to keep things quiet, with only word-of-mouth or mystery symbols pointing the way.

It is quite the opposite of some of the new age to recite such as, Sedona, Arizona where the Chamber of Commerce will give you a map of all the energy vortexes.

Throughout history, people have gravitated to southern France to discover something deeper. There are stories of sacred texts written by Mary Magdalene, Knights Templar artifacts from Jerusalem, Cathar treasures and more hidden somewhere in the rugged, mountainous lands. Many people have their theories where the treasures are hidden yet nothing has been discovered in over a century. Author, Dan Brown describes in the book, The Da Vinci Code, the secret of The Holy Grail is held in the local church at Rennes Les Chateau.

Maybe the secret of The Holy Grail is not about a cup, or the blood of Christ but a deeper more personal secret, enlightenment. People go to these special places to allow the energetic consciousness to open their awareness. It does not mean the sacred texts of Mary’s “Book Of Love” does not have special meaning. Words have a more rudimentary language then the abilities to perceive a higher vibrational emanations from places like, Pic De Bugarach, Rennes Les Chateau, Cave De Mary Magdalene or Payerpertruse.

Even though these places are old to ancient, their secrets are still alive, vibrating and available to our access. People 1000 to 2000 years ago knew of their intuitive skills and they built structures to facilitate the energies or marked natural land-sites that were phenomenal. Maybe it was an attempt to teach others a higher form of spirituality. As the Catholic Church grew in influence and began to stop recognizing the energetic, spiritual side of a higher power, the local French people and priests made their knowledge secret. They still built energetically, aligned churches and buildings, accessing the powers of Pic De Bugarach’s lay lines and used such concepts of sacred geometry. It was most likely wiser to make the information subtle. If you were educated or intuitive you could have access, if not study the standard church protocol.

Today, these sites are accessible for the intuitiveness and those who wish to study more of the historical/esoteric writers such as Henry Lincoln, William Henry or Val Wineyard. Still, the books, as good as they are, do not cover it all. There are places no one writes about and only the locals know about, here in southern France. Such places as, Celtic ruins, fairy forests, dimensional portals of energy, energetically powerful caves and more. It is been my privilege and curiosity to find these places, so obscure it would be impossible for GPS or maps.

I’ve been lucky enough to meet people who were willing to guide me, (to show me the winding trails, in forests, sheep trails, and beside a farmer’s land) where these powerful places exist. I cannot show many of them with a map but guidance is required. As an intuitive, who feels energies of land, I have been able to discover the most dynamic places and understand why they are so powerful. The Pyrenees Mountains are in general a most powerful place, however Pic De Bugarach is the centerpiece of the power with a variety of places charged by its presence. If you are intuitively oriented, be prepared to have your senses opened. If you are not, be open to the possibility, you can be opened.