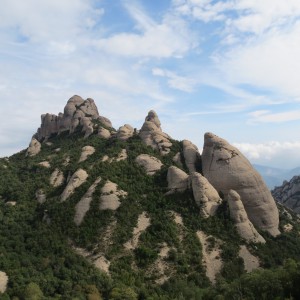 In the United States the source of the power spots is mostly fueled by the tectonic plates such as; St. Andreas Fault on the west coast and Balcones Fault around Austin, Texas. These plate lines allow a greater intensity of an energetic source from the center of the earth to move upwards through the land. Most of the power spots in the United States have a fault line underneath them. Sedona, Arizona for example, has two fault lines meeting in a T-shape. Hollywood is under the San Andreas fault where the plates have a interesting bend or turn, therefore more energy seems to come up.

It is interesting where the United States highest levels of creativity occur, there are fault lines underneath. So much is created in California these days where the most intense fault line sets. In Austin we are provided with a major fault line and the beginning of the Balcones Fault going West from the central city. It is interesting how so many more creations and commerce are more prevalent on the west side than the east side.

The United States has one Stargate at Mount Shasta, California. There are 12 Stargate’s on the planet with each seeming to resonate with an energy center or chakra in the body. Mount Shasta appears to resonate with the third eye. It is very indicative of the consciousness of the United States as we are a thinking people, with higher ideas and great intellectual capacity.

As I reflect upon the power spots in United States, what I found the most powerful are: Mount Shasta, the redwood forests on the California coastline, Sedona, Arizona, and the Grand Canyon. The power centers are everywhere in the United States, these standout along with my beloved city of Austin, Texas. The power spots here in Austin seem to stimulate greater consciousness from the heart up to the third eye. As a result we are a very creative people. It is in my observation the power spots reflect on some of the strengths and characteristics of the people.

I would like to add in Austin, the most powerful place is Barton Springs, notice when you enter into the valley of the pool how you become calmer. The springs elicit serenity and stimulate the heart and throat. I find Barton Springs a great place to go journal as ideas are quite prolific for me there, I am simply hooking into the energy.

In France and Europe the fault lines are not the greater influence but more from lay lines emanating from the two major star gates in Europe, Pic De Bugarach in France and Avebury Stone Circle in Great Britain. From these two great Stargates energetic lines move out to various places throughout Europe. Even Dan Brown in the book Da Vinci Code writes of the Rose Line which is basically a lay line coming from the Magic Mountain, Pic De Bugrach. It is why I enjoy France so much as I go to the power spots where the lay lines rise from the earth to resonate on its surface, people have been identifying these for centuries and have created their churches and sacred places there.

The lay lines of Europe affect us differently than the tectonic plates, in my opinion the energies are more dynamically felt and there are many more in a smaller area. In the Languedoc region where I stay I can easily identify over twenty-five power spots and I am sure there are many more. Each of the spots resonates with different chakras.

Generally speaking, for France and Pic De Bugarach energy is more associated with the heart chakra. The Avebury Stone Circle in Great Britain resonates more with the second chakra. If we compare France and Great Britain by chakras we understand their people better. The second chakra is about having power and England’s history is strongly associated with being powerful. In fact, is quite amazing a small island at one time was the most powerful country in the world. In comparison, France is a much gentler society where passion, artistic endeavors and graceful social interactions are a way of life. It is more of a heartfelt place.

One of the aspects making France so special is its connection to something softer. It is often associated with the divine feminine and Mary Magdalene. Little is known about Mary but much is suspected; she was an Essine and studied in the temple of Isis. She was an equal to any of the apostles and possibly partner of Jesus. She came to the Laungedoc region teaching principles learned from Jesus and her own impressive background to those who became the Cathars.

As people venture to the sacred places, churches, power spots they experience a presence of something feminine. Is it the presence of Mary? The goddess/divine feminine, the presence of the heart energy of the stargate or a bit of all the above? Each person has their own interpretation and connection. There are places I am convinced have the presence of Mary, others feel like the sweet heart consciousness of the feminine and others something else. It is the beauty of this land; a multiplicities of higher vibrations emanating out of them making this Aude or Laungedoc region something very special. A place where we can cultivate the divine feminine in us.