The Cave Of Mary Magdalene 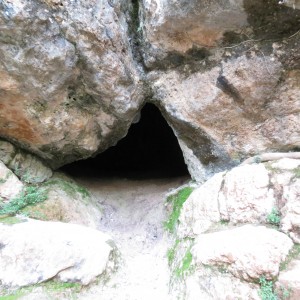 There are so many best-kept secrets in southern France, by the grace of God people appear in my life to be my guide to show me a few of them. Thanks to Maurice who volunteered and my traveling companion, Cecile as we visited The Cave Of Mary Magdalene.

We rendezvous at the hilltop near Rennes Le Chateau, this is the land of a ancient people called The Visigoths, who in the 4th century had a thriving community of 30,000 people on this strategic hilltop. Along with, most likely the Romans, built the 1st sacred sites and buildings at Rennes Le Chateau (world famous church recognized in adoration of Mary Magdalene). It is hard to determine the dates but stories abound the sacred place was a Temple of Isis long before it became Christian. The Visigoths were one of the two groups to embrace the teachings of Mary Magdalene and later became part of the Cathors. The teachings in those days were a blend of Celtic pagan values, some writings from the Bible and Mary Magdalene (The Book Of Love). We were venturing into a valley below the strategic hilltop.

Luckily the walk was not too stressful beginning with a stroll down a red rock road and then to a large valley where we walked the footpath used occasionally by humans but mostly by goats. We followed a narrow trail along the cliff side for several hundred feet until we reached a 30 foot waterfall and behind it the cave opening along a red clay embankment all sequestered behind the trickling waters. I felt as if I was in the rocky, steep terrain of the Texas Hill Country except the March temperatures were more French of 38-40° F.

The cave entrance was of red dirt and small as one person entered without a backpack to begin a careful upward steps on a moist clay slope of a 45° angle. It was a careful ascension up thirty feet to the top of the cave as each member of the party of five made it to the top they planted their feet firmly in the ground for stability as sitting would be wet and dirty.

Once positioned I took a couple slow deep breaths and closed my eyes, then it appeared, too strong to wait for a subtle entrance. I felt it’s presence immediately in my 2nd chakra and at the bottoms of my feet, a sun like shape in its bright glowing presence. It was not hot, burning fire but a nurturing sun. Even in its gentleness there was immense power, the same kind of divine source required to create a miracle of growing a plant or conception of a child. In fact, this image of the sun continued to have a naked baby lying in the sun as if it was showing me the gentleness it had for all creation.

It is a cave of sacred inception with the energies of the Earth can be accessed for magical, divine purposes. In fact, the cave’s inner shape was very similar to the vagina. We walked up into the highest place of the womb for meditation.

I can imagine couples throughout ages walking up and to the top to find a place to make love, generating energies from sacred places to transfer to their dreams. Maybe the request was for a child or a bountiful crop for the family. Rituals connecting to the earth was and still is a powerful generative energy planning seeds for our dreams. Maybe even Mary Magdalene was here doing or leading some of the same sacred rituals?

Perceiving the energy with an extra-sensory investigation five feet up in the ceiling at the high end of the cave, above the vagina shaped formation was a very strong masculine energy. It was easy for me to meditate on the generative energies of the feminine, sun, with the masculine power that was directly above it.

After we had finished the meditation and carefully walked down the potential slippery slope our guide directed us to a second path to take us upward above the cave. I thought the group was ready to leave and being that everyone spoke French I had not heard all the directions. In another minute we were at the face of another cave with a totally different energy.

This cave entrance shouted out with energy, I almost felt energetically knocked over. We climbed up into the cave to find the most masculine energy, it was what I was subtly feeling in the other cave. My solar plexus was alive with energy and I wanted to take action such as using my walking stick to do martial arts poses. The energy of this cave seemed to have the source of a substance like iron, it was pure strength. I can imagine men meeting here and making plans for the year, discussing with logic what to do in a variety of situations.

It was an amazing experience to be in both caves, one created directly on top of the other, the most amazing creation of masculine and feminine. It was so naturally strong and powerful that it felt unnatural. “How could mother nature create something of such perfection?” I do not have answers, only questions.

However, I do hope to visit the cave again soon and include it as a part of the tour. I can see why it is called The Cave Of Mary Magdalene as she is the centerpiece of consciousness here. This cave goes to more pagan roots of generating life used long before Christian times. It does feel like Mary visited the cave and she is a part of it. The Mary energies in this area feel very different, as there is a huge Heart strength, this is a different Gestalt of Consciousness. A bringing together of all energies with the most central power being the seed of creation as its power is for all creation including this earth, the power of the sun.