The Goddess Isis, In Southern France 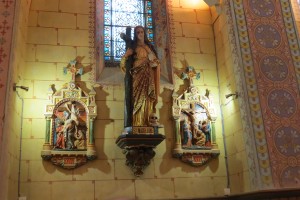 The Goddess Isis In France

I was visiting the “Iron Water Spring” near Rennes Les Bain and my friend pointed out a circle carved in a flagstone like wall with a symbol appearing like the 4 directions created by The American Indians of the Southwest. My friend said it was a symbol of Isis. I have seen it before carved into various stones in the area. This one however appeared to be very old.

How did Isis become a recognized goddess in Southern France?

According to author, Val Wineyard Isis was worshipped by the Romans who built several cities in the area including, Rennes Les Bain. She even speculates the famous church, Rennes Les Chateau was built upon a sacred site created by the Visigoths who lived in the area. This sacred site was a temple of Isis.

We think about the most advanced civilizations at the time when Romans and Visigoths lived in southern France, roughly 200 BC to 300 AD we go back to Egypt. Their culture was far more advanced in spirituality and had been practicing centuries before. Their influence was most likely shared with the cultures who traded with them including the Romans and Gaul (France).

There is speculation Mary Magdalene was a Sister Of Isis, being a member of the order. It is documented she brought the teachings of Jesus to Southern France however the teachings were most likely not in the construct of a religion. She was teaching tools and techniques on how to live a more loving and spiritual life. It was likely she taught what she knew. It was likely the teachings of what she learned as a Sister Of Isis was shared with the Visigoths and Celts who later became the Cathars.

The symbol appears if the design inside the circle could also represent the sun. It is interesting to not as one the oldest sacred sites in the area is The Cave Of Mary Magdalene. In this vagina shaped cave it feels as if it is a place where rituals of procreation of the land and families were practiced. It is also speculated this is where Mary Magdalene lived and practiced healing.

As an energetic sensitive to areas I perceived the cave with two main potencies. First, as a room of conception, energy was strong in this cave. However, this energy is not necessarily about promoting the sexual act but creating the birth of things such as good crops.

Second, the presence of the “Inner Sun” was dominating in the cave. In an odd way it feels as if a presence of the sun is coming up from the earth from this direction. It is not physically warm sensation, when I close my eyes I see from my inner vision a sun below me creating growth like the sun from the sky. In many pagan culture there is a worship of the sun, however there is a growing speculation the cultures worshipped a sun within the earth as well as the sun beyond us. The Presence of The Inner Sun exists very strongly in the cave. Maybe the symbol of the design inside the circle represents the sun inside the earth. It is purely fun speculation. As a psychic some observations are best kept insignificant and are purely for entertainment. However, I find the story fascinating. The more I visit France new mysteries are discovered and others unraveled. The more I commune with the presence of places where Mary lived, meditated, did rituals, I feel her presence and get a sense what she was like.

There are many groups to experience in this rich, historical land from The Cathars, Romans, Knights Templar, Celts, Isis, an older form of Cathar based Catholicism as well as the traditional Catholic Churches. All here living together in the valleys surrounding The Magic Mountain, Pic De Bugarach. Not only can you learn the stories but can feel the very presence communing with you.

southern france tours
The Churches Of Mary Magdalene
Life As A Tour Guide, In Search Of The Holy Grail