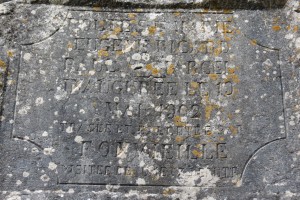 In the communal forest south of Bugarach, on a road no one knows its age, is a marker or a plaque engraved into the flat side of a rocky hillside. There at this relatively vertical rock face, engraved into the stone as a marker, written in French, reads at the top, “The path of Mary Magdalene”. Below the title are the names of the two French locals responsible for plaque, the date created in 1902, and a quote at the bottom.

No one knows exactly why this plaque was created on a road that leads on a path in the rugged hillsides as a eventually leading to Rennes Les Bains. Was this to commemorate that Mary walked these roads? Or something deeper?

According to local historian and author Val Wineyard; the two men who were responsible were friends of the famous priest of Rennes Les Chateau, Beringer Sauniere. Berenger was most likely select in his friendships, in that his associations were built in the common grounds of local history and spirituality. It guides me to the assumption this plaque was not about a walking path but a spiritual one.

I had only been to this site once before when one of my local friends, Marcella asked me to go to the site with her. She had visions this was a special place and had begun meditating there. A friend of mine and I sat against the flat rock wall below the plaque and began to meditate. Once relaxing into the surrounding, it appeared as if a part of my spirit entered into another world. It was a place very dark reality, yet I felt at peace in the presence of this immense power. I knew it was very special and through several mediations I began to realize this was an energetic opening to a source deep within the reality of the Stargate, at Pic De Bugarach, located only two kilometers away. That was the Path Of Marie, to energetically or astral travel into the alternative world of the Stargate. Now, it is one of my favorite places to meditate.

The secret/unknown power spots is typical of this area, in the foothills of the Pyrenees Mountains, to be spotted through out the landscape. Some of these energized areas are famously sacred, others that the locals only know, then some even fewer have recognized. It is a small population who appreciate the energetic side of France, for me it feels like my own personal playground as there are so few or no people at these amazing places.